Week two of the Chelsea Hotel Autumn tour took the company to Lincolnshire for performances in Lincoln’s Drill Hall and Spalding’s South Holland Centre. The show has received fantastic feedback from post-show audiences, celebrating the performance as ‘innovative’, ‘like nothing they have seen before’ and ‘outstanding’.

Audiences at Lincoln Drill Hall were treated to pre-show entertainment from local artists performing Chelsea Hotel related music and enjoyed the show so much that they travelled to Spalding to watch the production again two days later.
Chelsea Hotel came to Spalding’s South Holland Centre, a venue that was completely new to Earthfall and with a different demographic to Lincoln’s Drill hall.. The new audience came away with an enthusiastic response to the performance and we look forward to building our relationship with the Centre and its audiences for future performances.
The new App for iphone and Android devices has also continued to engage audiences, after the performance has finished. With over 80 downloads of the app as well as direct engagement with the Augmented Reality extra scenes immediately after the show, the App has helped to create an extra dimension to the performance experience and generated air of excitements at the venues.

With performances coming up in Plymouth, Kent, Bath and Cardiff in the next few weeks, we’re looking forward to sharing the show and everything that comes with it across the UK. 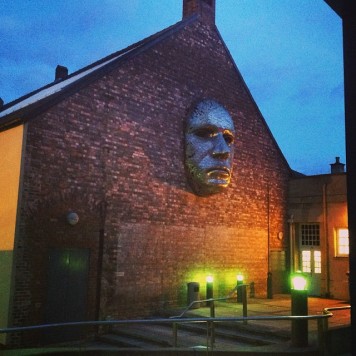