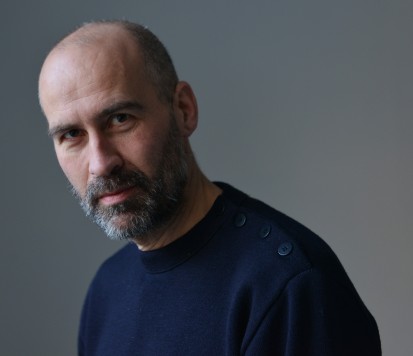 I suspect, but am not sure, that I first met Jim and Jess through the Polish theatre company Gardzienice. This may even have been in Poland in 1987, but more likely in Dartington in ‘88. When they formed Earthfall I had already been photographing experimental theatre and dance for some time and was happy to come to Cardiff to shoot their shows. Usually I would come in quite early in the production process in those days, shooting fragments of material rather than whole shows for publicity material.

So this has been a very long working friendship/relationship and the company is a kind of extended family; the personal and professional merge in a working process which always feels generous and inclusive, collaborative in a very true sense. Earthfall are also clearly flying a flag with a dragon on it!

When they asked me to shoot the Chelsea Hotel photographs I had just been reading Patti Smith’s book Just Kids, which was the source of some of the material so I was very familiar with the territory, as well as having been to the real Chelsea Hotel myself in the 1990’s.

Around that time I also stayed at Hotel 17 in the east village of New York, known, at the time, as “the new Chelsea Hotel”. I did a shoot for Forced Entertainment’s Show Time, with Richard Lowden as a suicide bomber wearing a cartoon gelignite bomb; an image which has changed its meaning over time, but at that moment was more black humour than grisly portent.

I’ve been working with Adrian Heathfield on a series of films about philosophers, whose work has a bearing in the way we look at performance; I have just finished a show called Doubletake with Chris Nash, which charts our work with dance umbrella artists over nearly 30 years; during the summer I made a projection work of still photographs called Unstill, which premiered at PSi19 at Stamford University . I continue to shoot new posters and shows every week. Travelling is fairly incessant – I’m writing this at the airport, so it seems that delays are not all bad…