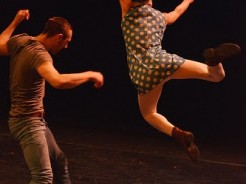 We are pleased to announce that Earthfall’s Chelsea Hotel performance has been nominated for no fewer than three awards at the upcoming Theatre Critics of Wales Awards this month.

The categories in which Chelsea Hotel is nominated are:
Music and Sound
Digital and Online
Small Scale Dance Production

We’re excited to be appearing alongside some of the most prestigious names in Welsh performance, such as Dirty Protest, Gabblebabble, Theatr Genedlaethol Cymru and National Theatre Wales.

Earthfall could give masterclasses to a new generation of overly digi-utopianised theatre-makers on the deployment of gadgetry in a way that enhances live performers.

The winners will be announced at the Awards Ceremony in Sherman Cymru on January the 25th. We’re looking forward to seeing everybody there and best of luck to everyone nominated.