Dynamic Dance Music and Film
You are here: Home » Participate » An Interview with Jess Cohen and Jim Ennis on the Role of Digital Media in Physical Theatre 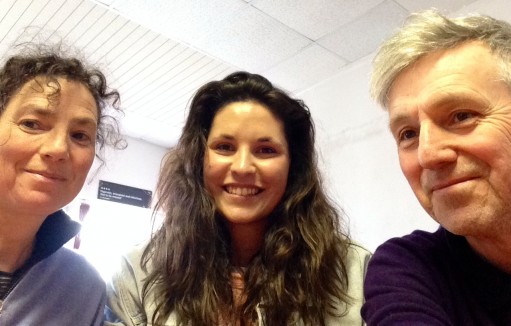 In March 2014, Rosalia Chieppa, a final year student at the University of Kent studying for a BA in Drama and Theatre studies , came and interviewed our co-artistic directors Jess Cohen and Jim Ennis. For her final project she wants to explore how physical theatre can be juxtaposed with different mediums such as music and film. During the interview Jess and Jim spoke about their creation processes and how the mediums can collaborate successfully.

Jim spoke about the processes film footage went through and the decisions that were made before the final performance. For him, the fundamental aim was the connection between movement, the theme and live sound. Earthfall avoid the use of digital media in a gimmicky way, but rather use it to tie everything together. A lot of the time the film comes later in the process but notions of how it will be used crop up throughout.

Jess explained how it was important to get the balance right between digital screens and movement on stage. Sometimes TV screens can suck the audience away from the bigger picture and upstage everything else that is going on. It should only be used when necessary.

Rosalia spoke of the camera that was positioned above the bed in Chelsea Hotel and how she enjoyed the two perspectives. Jim explained that having the camera filming from above and being projected for the audience to see ‘brought attention to the live execution of the choreography’. So, this highlights the very practical reasons for using film, to make sure the audience can see all angles.

Film is also used by Earthfall to zoom in on a detail, especially moments that could be lost to an audience. Grabbing motion is used to zoom in on something that could have been missed due to all the other ‘visual ‘traffic’ surrounding it. For example, a movement of high dynamic such as a body in flight or two bodies in collision could be grabbed by the camera to emphasise that fleeting moment. Film, in this sense, allows the directors to decide what the audience sees.

As well as adding a new dimension to the final product, film can be used as an aid to record and capture everything during the creation process and rewind to bits of improvisation that could be essential. It can record all the rubbish but also the discoveries and strengths.

Jess went on to talk about Earthfall’s early explorations with film around 25 years ago using the ‘Super 8 mm’ film when digital media wasn’t advanced and celluloid film was used. In those days they could be projected onto objects such as walls and there was a great whirr of sound that the device made. Jim added how super 8 was very ‘grainy and authentic’ and worked very well. He mentioned that the battle with digital was that sometimes, it the early phases of development, it could be quite cold and sterile, but with manipulation it can be very flexible.

In relation to the musical element, Earthfall always uses live music, with different musicians for each show, some of which are used regularly and have a long standing relationship with the company. In the early days, Earthfall enjoyed worked with world music and this later turned to working with more electric music. Singers are also used, for example Earthfall have worked with a Polish group (CHOREA Theatre) for around 10 years. Jim and Jess explained how they liked to integrate the music into the movement as much as practically possible. In At Swim, the musicians have to be covered by a Perspex wall to prevent any water damage to instruments.

Actual footage is used as well to inform the context of the piece. For example, in At Swim Two Boys, footage of World War One acts as an ‘oppositional’ element as you see the developing harmonious relationship between the two boys compared with the atrocities that are happening around them. This really aids the theme of the piece.

The interview pinpointed the many different uses and considerations when using mediums such as film. The rehearsals present a road map consisting of many different strands of visual, film, literature and music stimuli. These initial ideas are presented to the company and from then on it is a ‘creative democracy’. Everyone in the studio has creative license to interpret and evolve ideas in a personal way. The digital aspect can assist the audience in the practicalities of viewing the work but also with the psychological process.