Dynamic Dance Music and Film
You are here: Home » Plus » Meet David Johnson 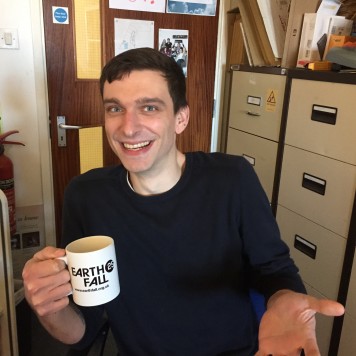 My name is David Johnson; I have just taken over as Touring and Development Officer here at Earthfall. I have been engaging with the arts for most of my life. As a lifelong musician I have performed as part of many

projects across the UK. I spent many years living in Manchester where I was able to develop some great community art projects. While studying at University I initiated a community Samba project; we delivered workshops in Primary Schools and Young Offenders Centres and regularly played sets at some of Manchester’s club nights. I also took advantage of Manchester’s vibrant arts scene and ran a regular night of music, poetry and drama.

I used these experiences to spend three years working with Manchester City Council. The focus of my role was to deliver music workshops to adults with a wide range of learning disabilities in one of Manchester’s most deprived areas. I am passionate about increasing access to the arts for people with disabilities. I have worked with some amazing artists who are committed to making sure the arts do not become inaccessible to vulnerable groups.

I have recently returned from living in Barcelona for two years. During this time I was able to learn Spanish and work as a language teacher and a proof-reader. I also linked up with a Spanish Language theatre company and developed the score for their production 9 Metros. I returned to the UK absolutely committed to working for a creative and challenging company, which shared my passion for creativity and community engagement. I am thrilled to have joined the team at Earthfall; I am inspired by their previous works I am very excited by their plans for the future. I was drawn to Earthfall for a number of reasons. Their work is energetic, unusual and challenges the audience to interpret the narrative themselves. I love the more experimental side of film, music and theatre and was impressed by Earthfall’s use of fantastic live scores and progressive work in film.

Everyone at Earthfall has been really welcoming and I am enjoying discovering Cardiff and all it has to offer in the arts.