Dynamic Dance Music and Film
You are here: Home » Archive » Plus Archive » India 2013

Earthfall and CHOREA (Theatre Association Chorea) performed their long time collaboration After the Birds in New Delhi India on Tuesday 8th January, at 8:30pm in the largest theatre festival Bharat Rang Mahotsav .  This was followed by a director’s talk on Wednesday 9th January in the National School of Drama.

Bharat Rang Mahotsav was established a decade ago by the National School of Drama to stimulate the growth and development of theatre across India. Originally a national festival showcasing the work of the most creative theatre workers in India, it has evolved to international scope, hosting theatre companies from around the world, and is now the largest theatre festival of Asia.

After the Birds is a result of international theatrical project created by Earthfall and CHOREA from Poland.  Using two absolutely different aesthetics and working methods, the two groups jointly created a brand new artistic language on the border of genres and styles. CHOREA and Earthfall provoke the collision between ancient Greek choral songs, modern live music, urban space choreography, highly physicalized choir, and fears of the modern world. The performance features a radical fusion of elements adapted from Aristophanes comedy, The Birds. The show has been performed in mainland Europe every year since 2005, as well as in Russia in 2011, and this is its much anticipated premier in India.

Tomasz Rodowicz, from CHOREA and co-director with Jessica Cohen and Jim Ennis of Earthfall, talks about the relevance of the piece today.

“We have attempted to answer the question: what is left after Aristophanes’ The Birds, ancient Greeks and their culture, and what do we have in common with them? Athens in Aristophanes’ times went through devastating wars, collapsing democracy, political crises, plots and power struggles among different political factions. From behind the tall walls, gods look like corrupted idiots, and people look like dwarfs deprived of dreams. Can a paradise on Earth be built only behind barbed-wire fences? Do all world healing visions become equally bitter and dangerous, when we start putting them into practice? During the play performed in the global crisis and terrorism era, we pose these questions not only to Aristophanes.”

This performance comes on the back of last year’s shows of After The Birds for the EU Parliament in Poland and in the Meyerhold Centre in Moscow. 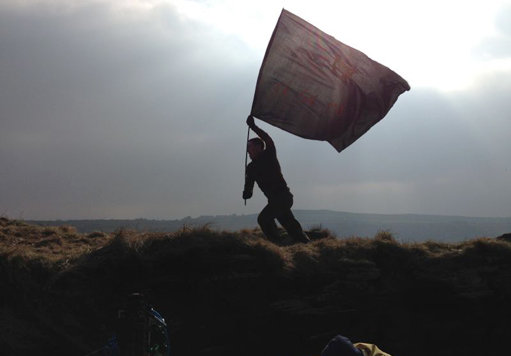