Dynamic Dance Music and Film
You are here: Home » EngageEngage » NewsNews » Plus

Bath University student Rosy Copping chatted to artistic directors Jim Ennis and Jess Cohen in an exciting interview about their ideas on dance and physical theatre: 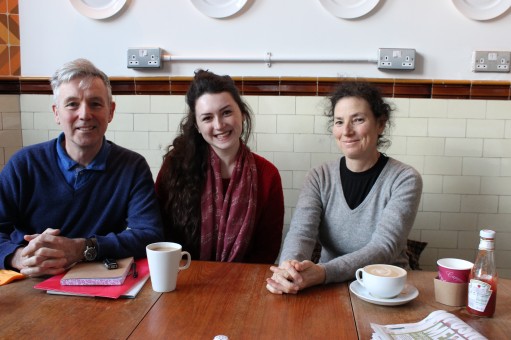 Could you tell me briefly a little bit about Earthfall?

What do you understand by the term ‘physical theatre’?

Jess: It depends on which perspective you are coming at it from. We actually like to call ourselves ‘physical theatre’ because the expectation of an audience, when they’re coming to see a piece of dance, does not match what we present on stage.  However, if they come from a theatre background, they think that we are very much ‘dance’.  We prefer to be categorised as ‘physical theatre’.

Jim: For us it’s to do with a body and making a physical communication in a space to a spectator. 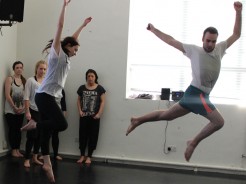 Jess: Dance, for me, is defined when there is no narrative. I think that the communication of narrative, partial narrative or even emotionality changes a dance piece into something which is moving towards the spectrum of theatre and physical theatre.

Jim: We deal with discreet or fractured narrative, so I suppose that we come from a postmodernist table really, where things are broken down or unfinished and you move on to the next phase. We make deliberate shattering in our work.

What is your devising process like? How do you come up with ideas in your work?

Jess: About 90% of our work has been based around some social issue or humanitarian issue or an exponent of an art form which isn’t dance; something which is relatable to individuals, but also within a kind of world context as well. 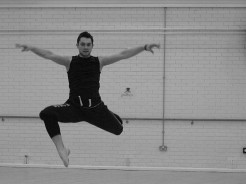 Jim: We start with a series of ideas or just one idea. From that we start to assimilate information. We read a lot. We write down a lot of ideas and we acknowledge previous work we’ve made, because we also are conscious that our work is evolving. Then we bring the company together and hand them the ideas on sheets of paper. We give them films to look at, we give them books to read and research .We try to get active almost immediately. Generally we start in an empty space with a dancer/performer and a musician. The live music and movement start off with an improvisational theme and then we start fishing out the elements, the essentials of that development. Often we give some days for the group to ‘bed in’ if they haven’t worked together before; there is a dynamic in working together.

How do you feel that your methods in creating physical theatre would differ from those who were specifically creating ‘dance’ or just theatre?

Jim: We have a co-creative process, we introduce a creative democracy. We’re very much open to change from the performer’s input and we’re not absolute choreographers: everybody choreographs.

Jess: Yes, and through improvisation we can find really interesting movement that you can’t even imagine before you try it. Sometimes we’ve got to lock those down on film, because 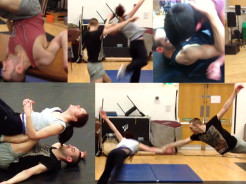 none of us can remember how we got there, but the camera can, so then we can reconstruct from that. So we’re like editors: directors and editors.

Jim: It’s a dialogue, there’s mutuality to it and that’s really important for us. The important thing in our process is to locate the honesty within the performer,  so that they can expose who they are, or the essence of the material they’re trying to deal with; their relationship to it.

Do you think that the difference between physical theatre and dance is all in the perception, or do you think it is more about the technique and style?

Jim: Some definitions of physical theatre come about because the performers were not trained as dancers, so their technique is either different, or comes from a multitude of different disciplines; they are using their bodies in a way which is communicative physically in a performance situation, but recognisably not with a dance technique behind them. We tend to use people who are trained in dance, because that gives them a much larger vocabulary of possibilities when they execute our kind of work which is non-traditional dance.

Jess: We look for people who are dance trained, but have an open approach of how to move; if they’ve done martial arts for example, as well as dance. 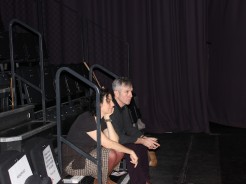 Working on Chelsea Hotel in Salisbury

Jess: Well there is a difference isn’t there? Four companies that categorise themselves as ‘physical theatre’ are Earthfall, DV8, Volcano, Frantic Assembly. Frantic and Volcano are from a theatre background; DV8 and Earthfall are from a dance background. They’re all categorised under Physical Theatre, but you can’t say that it would be only the dance ones that can call themselves ‘physical theatre’ or only the theatre ones because there’s a difference.

Okay brilliant, I think that’s everything, thank you!

Another Award for Chelsea Hotel?

If three Theatre Critics of Wales Award nominations weren’t enough, Chelsea Hotel has now been nominated for the Dance Award at the 2013 Manchester Theatre Awards.

The winners of these prestigious awards will be announced on March the 7th at the city’s iconic Royal Exchange Theatre and hosted by performer Justin Moorhouse.

Chosen by an entirely independent panel of theatre experts, who see hundreds of shows at venues small, large and unusual to pick the cream of the crop, awards range from Musical, Dance, Opera and Visiting Production to acting categories.
http://manchestertheatreawards.com/news/50 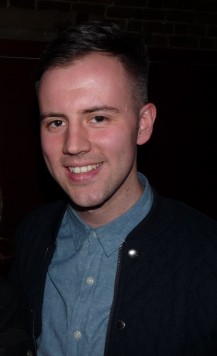 Earthfall’s work would  be impossible without the hard work and talent of the many people who contribute to the many different aspects that make performances possible. Each week we’ll be catching up with one of these amazing people and hearing what they’ve got to say

This week we catch up with Andrew Greer of Arthur Leone PR:

Arthur Leone PR handle the press for the tour of Chelsea Hotel. The first production I worked with Earthfall on was At Swim Two Boys and it was such a fantastic piece. I remember trying to decide on where we should sit critics so that the water wouldn’t splash them, then I hastily sat in the front row at the last minute and got soaked! It was great fun.

I think Earthfall are a fantastic company and one that Wales should be very proud of. I respect that Earthfall are keen to educate and inspire audiences in and out of Wales, and they also provide a range of learning and participation opportunities wherever they tour. I think inspiring the next generation is key and shows that there is talent all over the UK.

Earthfall aren’t afraid to push the boundaries within dance and challenge audiences. I also think it’s crucial that they share their work and tour their productions, not only in Wales, but in England and elsewhere (which is no mean feat!).

I hadn’t heard of the hotel before working on the current production with Earthfall, but upon researching it, I was fascinated by the place and hope to visit one day. It’s such an iconic building; I’d have loved to have been there!

As a musician I was very excited about the live music aspect, especially as the musicians were visible. I think it was very much in keeping with the bohemian feel of the piece. I was also, obviously, looking forward to the choreography and costumes and they didn’t disappoint!

Well we’re coming to the close of the Chelsea Hotel Autumn tour and it’s been all go for the past two months! 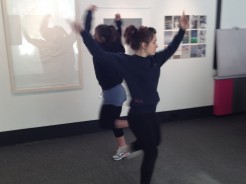 Tonight we’re off to Edgehill in Manchester and then Thursday takes us to Salisbury Arts Centre for a pre-show curtain raiser with Jigsaw Youth Dance. You can read about the preparatory workshops with tutor Billy Brown below. 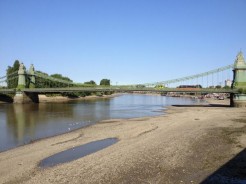 We’ve had some fantastic highlights along the way – from themed pre-show entertainment at Cardiff and Lincoln, to fantastic workshops with dance groups from all over the country. We’ve collated an impressive gallery of pictures from different venues as part of our  #Chelseaview Twitter collection. Check it out by following us @earthfall.

The Chelsea Hotel app has let allowed the company to give the audience an interactive ‘bonus feature’ and it’s been really popular:

“I really enjoyed the extra dimensions that the app added to the show – it made me feel a part of the performance and it looks great!”
Mel Goldsmith 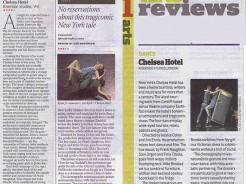 You can check out the reviews of the show on our Press Page and, if you’ve already seen the show, we’d love to hear your thoughts and there’s even a chance to win an Earthfall goody-bag by submitting your own review of the show, here.

You can still catch the show at Aberystwyth Arts Centre and Pavilion Dance in Bournemouth. Check out our Tour Dates page for more details – looking forward to seeing you there, and don’t forget to download the Chelsea Hotel Smartphone app for hidden extras after the show!