Arts Active are recruiting participants for their summer project. We’re working on a large scale project partnering Community Music Wales, Earthfall Dance, Literature Wales, Crew Celf and NoFitState Circus to create a cabaret/ variety style performance. This opportunity is open to 14 – 25 year olds.
Project dates: Monday 1st – Saturday 6th August 2016
There will be a week of workshops hosted at RWCMD with rehearsals and a public performance taking place at the New Theatre (tickets now on sale).
*** This project is 100% FREE to participants ***
Participants can register via Eventbrite: https://www.eventbrite.co.uk/e/get-involved-performance-at-…
For any additional information about the project or questions, contact 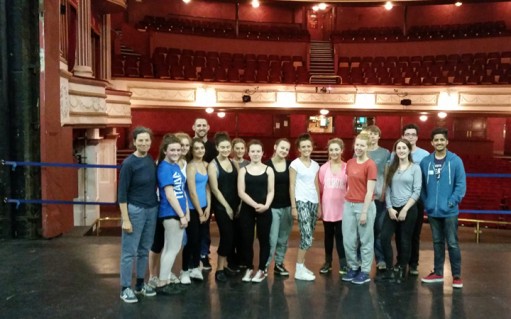 Earthfall is in residency this week, April 11-15, workshopping with Bath Spa students
towards a short performance.

During the autumn 2015 tour of ‘Stories from a Crowded Room’, as part of our audience development project, we were shadowed by Catherine Gomez, a Bristol-based film-maker.

Originally her brief was to film the company on tour and make a documentary about the creation of the production, and the life of a touring dance/physical theatre company.  However, just as Catherine was starting to make the film, we received notice from the Arts Council of Wales that we would not be part of their new Revenue Funded Portfolio from 1st April 2016.  The documentary then gained a life of its own as current performers, previous company members and collaborators contacted us and wanted to take part.

Stories from a Crowded Room went on to win the Wales Theatre Award for Best Dance in 2015, and the production sold out at venues across Wales and England.

Celebrating over 25 years of making live performance and film, this documentary looks back at an incredible archive of work, features interviews with company members, collaborators, and our two Artistic Directors, as well as behind-the-scenes footage of the Autumn tour.

The Documentary will receive its premiere on Saturday 2nd April 2016 at 1830 at the Atrium Building, with the kind support of the University of South Wales.  The screening will be followed by a panel discussion examining the future of making dance for film, Chaired by Matthew Gough (University of South Wales), with Chris Lewis-Smith (Bath Spa University), Catherin Gomez, Film-maker, and Jessica Cohen & Jim Ennis, joint-Artistic Directors Earthfall.

Tickets are FREE and can be booked via  the following link: https://earthfall.eventbrite.co.uk

Tell us your apology