Earthfall, Coreo Cymru and 4π Productions (formally Urban Reaction Research Lab) have produced a 360 degree film Pal O’ Me Heart, based upon the award winning At Swim Two Boys, as part of the Dance Dome project, which premiered in Edinburgh Festival 2013.  Pal O’ Me Heart went on to be screened at the Morrison Planetariuim, San Fransisco USA (April 2014) and then at the Macau Arts Festival in China (May 2014).  It now comes to Earthfall’s home city of Cardiff, on the 5th and 6th July for the launch of their Welsh tour.

Pal O’ Me Heart is the story of two Irish boys, set during the Easter Rising.  This adaptation was filmed on location on the remote Pembrokeshire coastline with the two dancers, Daniel Connor (At Swim Two Boys / Motionhouse) and Murilo Leite D’Imperio (At Swim Two Boys / Re:Bourne Lord of the Flies)  performing in and out of the water.   The piece was choreographed and directed by Jessica Cohen and Jim Ennis, DOP by Justin Duval and Edited by Manuel Pestana.

“This has been a brilliant experience.  Working with new technology that fully surrounds you creates an amazing visual experience for the audience and completely immersive you in the powerful imagery and story of the piece.”

“This unique programme will push the boundaries for both digital technology and contemporary dance.  By using a portable dome, Coreo Cymru in Collaboration with 4π Productions and Earthfall are introducing a new form of presenting contemporary dance to the wider public.”

The Dance Dome is a portable 360° cinema that blurs the boundaries between movement, digital technology and cinema, wrapping dance around the viewer to create a truly immersive experience. It is touring across Wales, with the support of the Arts Council of Wales.

The Dance Dome’s 2014 tour features two additional productions, Harnish Lacey Dance Theatre, The Sublime, which is a site-specific live captured sequence of parkour and break dance short, and TaikaBox, The Beautiful; an immersive metaphysical journey through some of the landscapes of South Wales, featuring gravity defying dance from Laura Moy.

This event is not ticketed so just turn up and queue.

This summer the Dance Dome will tour across Wales to the following:

Pal O’ Me Heart will be shown at Wales Millennium Centre as part of Big Dance on the 5th and 6th July.  For more information please contact Lewis Gwyther on marketing@Earthfall.org.uk or call 02920 221314.

Patti Smith on the Chelsea Hotel: ‘like a doll’s house in the twilight zone, with guitar bums and stoned out beauties in Victorian dresses’.

Earthfall are leaders in dance theatre and have been producing innovating and fresh performances since their formation in 1989. Earthfall’s creators, Jessica Cohen and Jim Ennis established the company with a policy of forging radical choreography with live music and strong visual imagery and tonight’s performance of ‘Chelsea Hotel’ certainly did seem to embody this. The live band and singers that accompanied the performance made the spirit of the hotel much easier to capture and embrace, and along with the partly prerecorded and partly live video being projected as a back drop the audience were really able to feel a sense of liveliness and intrigue.

The four dancers that performed in the piece raced around the stage with such intensity and drive and it was so exhilarating to watch as they threw each other around, fearlessly and tackled moves that made jaws drop and eyes squint. The dancers created a real buzz because their determination to really do this piece justice was clear. The Chelsea Hotel as a concept is a fantastic starting point which opens doors to numerous creative opportunities which I feel Earthfall portrayed beautifully. Not only were the dancers technically and professionally good, their expressions and gestures meant the piece could obtain a quirky edge that I think can only be achieved with such young, excitable dancers.

This is a must see for audiences who just want to see something fun. Something that will keep them awake, engaged and satisfied. As I left the theatre I heard someone mumble ‘hmm well it was alright, I think I’d give it 6ish out of 10′. Now I don’t know what theatre this person had just come out of but it certainly can’t have been mine.

The live guitar riffs resonate through the theatre, repeating over and over again.  On the other side of the stage, the dancers perform a painfully slow movement sequence to sit down at a table.  An old fashioned fridge and rickety old bed also share the stage.  This sets the scene of the infamous Chelsea Hotel – a New York icon, embedded in history due to the abundance of famous artists, writers and musicians who chose to live there.

The set, the costume, the video footage and the rock music all interweave to take us back in time, somewhere in the 1950’s, 60’s or 70’s, to an era of intense artistic creativity.  This journey is instigated by a powerful solo, executed from the top of the vintage refrigerator incorporating popular dance moves from that era.  The soloist, Rosalind Haf Brooks, is phenomenal throughout the entire piece.  All the dancers tackle the physicality of the choreography well, but I urge you to try and take your eyes off Brooks.

Artistic Director Jim Ennis explained to the audience that Earthfall creates ‘feel’ and ‘atmosphere,’ rather than following linear narratives.  This kaleidoscopic approach to devising is obvious in Chelsea Hotel, where the ghost train elevator takes us through love and delirium, anger and confusion.  While the piece carries an incredible energy, I felt Earthfall were clinging on to their physical theatre roots rather than revealing innovative choreography.  They have a recognised style that has worked for almost twenty five years, but I would love to see something drastically different from this pioneering dance theatre company.

They are experts, however in engaging their audiences.  This time it was with a chocolate gift, including an image to scan in order to download the Earthfall app.  This was a creative idea that intrigues the audience, and persuades them to download the app to watch videos of an extra scene from the performance.  Overall it was a classic Earthfall production – raw, physical movement and emotion, within an integrated multi media performance.  Some will say their contemporaries are beginning to outshine them; but Earthfall are still pleasing audiences nationwide and will always be a relevant name in dance theatre. 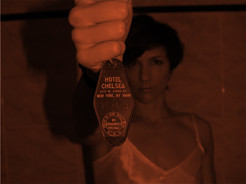 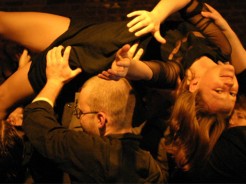 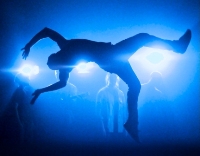 Stories from a Crowded Room