The Chelsea Hotel is one of the most notorious hotels in New York, rich with history of its  famous residents from the 1960’s and 1970’s, such Andy Warhol, Iggy Pop and Patti Smith. Here it provides the background for Earthfall’s production, as co-directors Jessica Cohen and Jim Ennis capture this era through the use of video footage and hand written lines projected on the back wall. As well as the live music that is set up in the corner of the stage and plays throughout the performance, setting the mood and shifting narrative for the dancers.

While the choreography starts off simplistically, as seen in the introduction as the couples sit at the table in slow motion, the routines become stronger and more complex as the emotions of sexuality, intimacy, dominance and hatred build throughout the interweaving couples.

The most intriguing dance is between the two men, and homoerotic desire between them.  This performance isn’t romantic as such, its aggressive as they struggle with their attraction for one another, but is never concluded. This is paralleled between the dance between the two women who are dressed as Edwardian girls, ghosts of the hotel, which is playful, soft and flirtatious as they giggle with each other and flit in and out of the audience.

Chelsea Hotel provides a strong and poignant performance that takes an alternative look at a sex and relationships.

For over a century Hotel Chelsea was a centre of creativity and artistic collaboration in New York City. Made famous in numerous songs, films and books the hotel has housed some of the most famous names in the world, including Andy Warhol, Bob Dylan and Madonna; it was also the place where Welsh-great Dylan Thomas succumbed to pneumonia.

Taking inspiration from the tales of real star residents (such as Patti Smith – title quote) and filling in the gaps with wonderfully imagined moments the ensemble had the audience hooked from the first moments with their amazing displays of control and strength. As their bodies writhed, tumbled and collided the four daring performers played out every shade of human connection and inevitable disconnection.

Special mention must go to Ros Haf Brooks whose pure physical precision made it impossible to take your eyes from her perfectly executed routines. When paired with the male strength of Alex Marshall Parsons the pair created some the most exciting pieces of physical theatre to glide over and crash onto the studio floor. 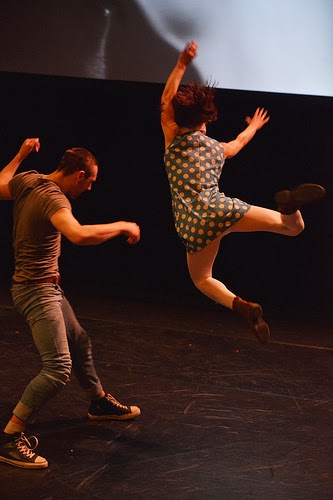 Providing some of the more tender moments Jessica Haener and Sebastian Langueneur played as a couple who blended beautiful naivety and sexual confusion. In a big city full of new experiences, surrounded by exciting and unconventional people it’s easy to get lost.

For the most part the film and projected images really enhanced the live action, offering another layer of imagery to the frantic physicality and original song. Also projected were the rare spoken moments, which sadly often jarred the pace and, although beautifully lyrical, the words just didn’t have the same visceral and emotional urgency as the movement.

The live, original score perfectly suited the shifting moods of the piece; effortlessly transitioning between moments of aggression, seduction and pure comedy. The band was multitalented and seamlessly integrated into the action, often moving around the space to highlight certain instruments. Although the music certainly enhanced the piece sometimes it would have been nice to have some silence, where the natural percussion of the performer’s bodies and their cries of exertion could have been heard.

As one of Wales’ most established and respected multimedia dance companies Earthfall have once again blurred the lines between theatre, dance, film and live music to truly capture the drug-fuelled hedonism and pure sensuality that created the allure and atmosphere of the bohemian artists’ haven – Hotel Chelsea. 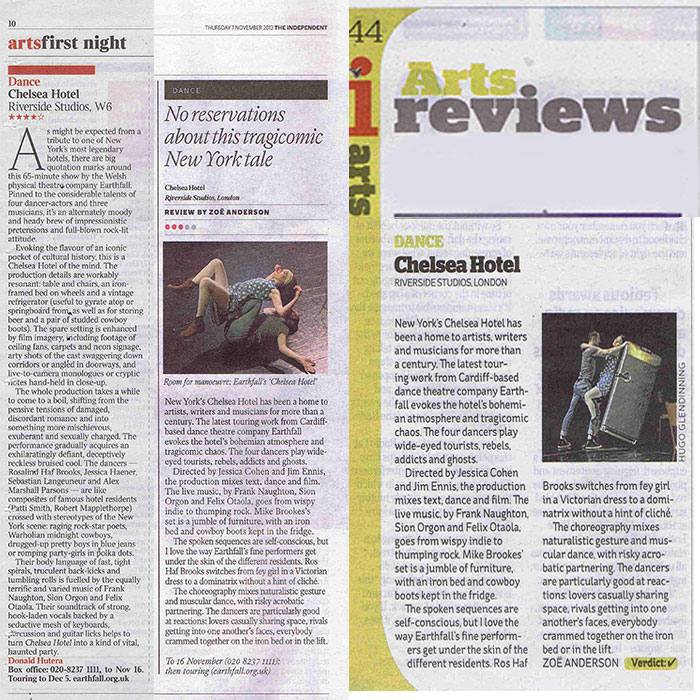 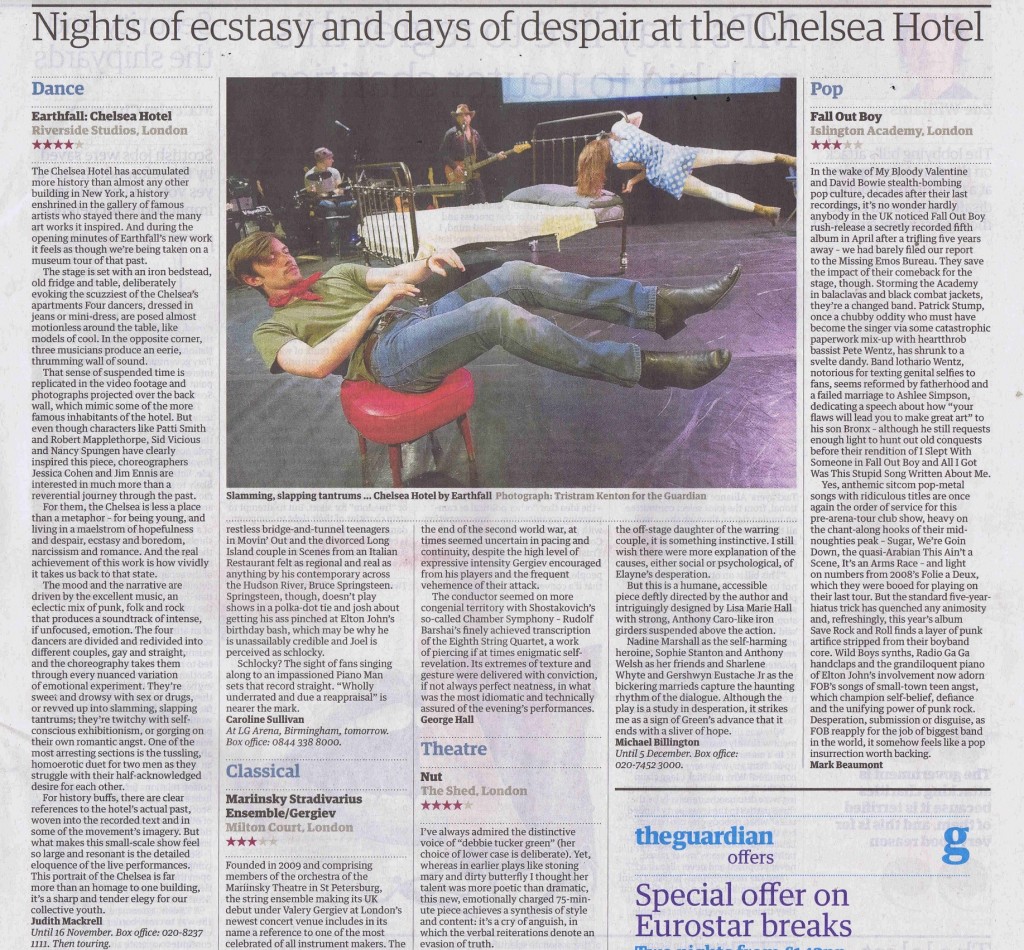